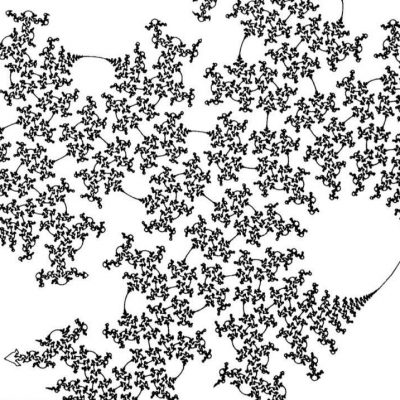 The Cannon-Thurston map is a geometric way to produce sphere-filling curves. Roughly speaking, one starts with a surface

The former has a “circle at infinity”

while the later has a “sphere at infinity”

leads to a map

between the associated objects at infinity. In the good case, when

is a fiber of a fibration of

is hyperbolic, one way to draw the image of

would be to draw a black sphere — after all, the curve is sphere-filling!

Thurston’s classic figure (above right, from this paper) shows an approximation of the sphere-filling curve coming from the inclusion of the Seifert surface

of the figure-eight knot included into its complement

. We seek to understand how this picture was drawn, to draw similar pictures for other pairs

, and to find other techniques for drawing Cannon-Thurston maps.